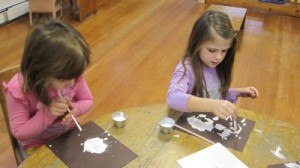 Tuesday brought us the first snow-covered morning of the season, which inspired some white art at the art table.  For some, white brush painting became a sensory experience of full hand painting, then scratching words into the snowy backgrounds, smoothing the paint back over them, and making more words.  Later in the week we used straws to blow the paint across the paper, and pom-pom brushes to dot out big snowy flakes. 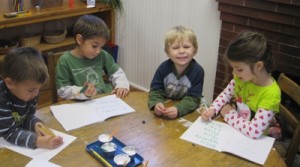 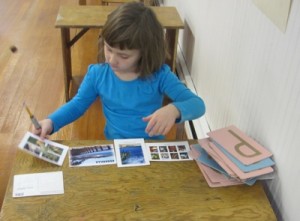 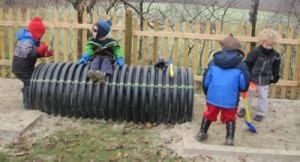 Cool Man on the Tube 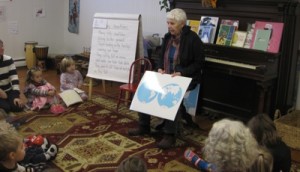 From New Hampshire to Scotland

Gerry Tobin joined us for music on Tuesday morning.  She began with a short discussion about her visit to Scotland.  We looked at a map to see that there is ocean between New Hampshire and Scotland and discussed how she needed to take a plane to get there.  We learned “Over the River and Through the Woods” in celebration of the upcoming Thanksgiving holiday.  Then we talked about Election Day and sang the song “This Land Is Your Land,” while playing bells and drums.   Thank you Gerry! 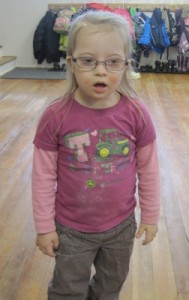 Our star of the week shared her fabulous book about herself.  We learned that she enjoys riding horses and playing in the hay, she plays the guitar and the piano, and she enjoys spending time with her mom, dad, and little brother.  We listened to her favorite story, The Foot Book, by Dr. Seuss. 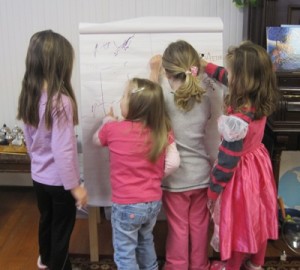 Writing on the easel paper

We read two versions of the stone soup story this week in preparation for Stone Soup Day on November 21st.  We then compared some similarities and differences between the two stories, A Pot of Stone Soup by Robert O’Brien and Some Friends to Feed by Pete Seeger and Paul DuBois Jacobs.  We learned the song “The More We Get Together” and a song about making stone soup from Some Friends to Feed. We are all looking forward to making our own soon!

A Kindergarten student reading “We’re Going on a Bear Hunt” 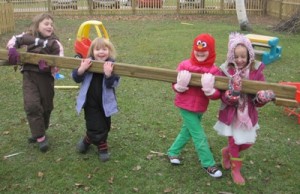 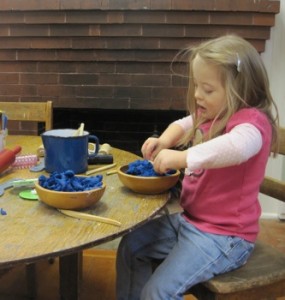 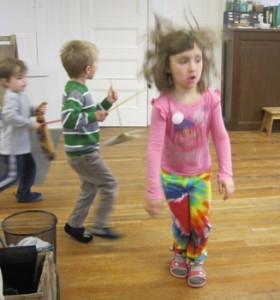 On Wednesday afternoon some of the students decided to play instruments, and enjoyed marching around the classroom with them.  On Thursday morning, they once again wanted to use the instruments, so we decided to sit down and listen to them and vote about which ones could be played quietly so that they would not disturb people while working, and which ones we would put away for organized music times.  Everyone used their good listening ears to help make decisions, and we filled a basket of “quiet” instruments to play when desired.  We even decided that we could leave out the big cymbal, because although it can make the loudest noise of all the instruments, it can also be played quietly.

We added a table setting activity to the Practical Life area, which the children loved doing.  They may be experts by Thanksgiving, so be sure to ask them for help! 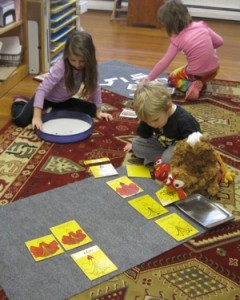 Helping Henrietta with her work

Henrietta chicken told us that she was using some of our classroom materials this week, but was unable to finish her work because some of the items were missing that she needed to complete it.  We talked about how important it is to make sure that all of the school materials stay at school, and how careful we will be to not put things in our backpacks or pockets.  We agreed that we would be respectful to each other by returning materials to their places when we are done with them. 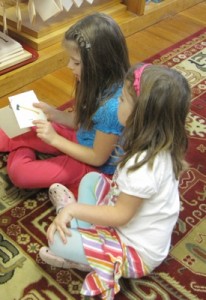 Reading the “a” sound book 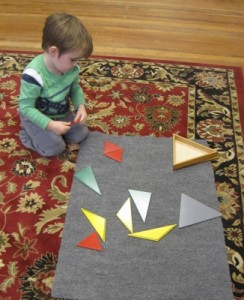 Working with the Constructive Triangles 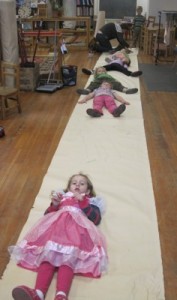 Thursday afternoon students lay on large pieces of paper to have their bodies traced.  We labeled the parts and many of them drew in faces and added clothes. 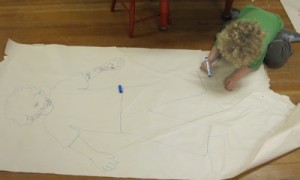 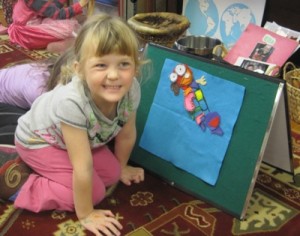 During Spanish we continued to focus on the parts of the body.  We sang “Cabeza, Hombros,  Rodillas, Pies”(Head, Shoulders, Knees, and Toes/Feet).   Everyone helped to create another version of Señor Loquito, and found it quite funny that most of his body parts were not attached to his body!

Next week we will continue to read versions of the stone soup story.  We will create our own ingredients out of flannel that we can use to make stone soup on the flannel board.   In the sensory table we will be making bubbles with grated soap again, so bring lots of extra clothes!