We welcomed Spring this week with beautiful weather! We spent lots of time playing out in the sun!

On Tuesday we made touch collages. The children were given materials of different textures such as sandpaper, feathers, yarn, rice, foam and they were able to glue them to their paper to make beautiful creations. We also read a book on the sense of touch.

We enjoyed reading Little Cloud, When Springtime Comes, poems from Where the Sidewalk Ends and A River Ran Wild. During music we sang a few spring songs such as, “I’m a Little Black Seed”, “Mr. Sun”, “The Itsy-Bitsy Spider” and “The Bumblebee Song.” 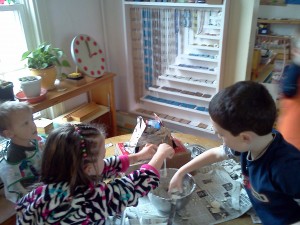 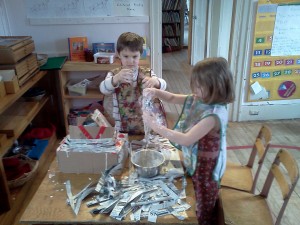 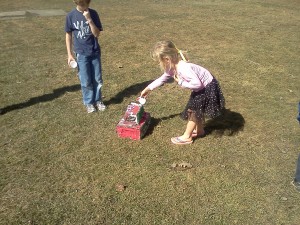 Lots of great work has been happening in the classroom. Our younger students are becoming very self-directed and staying very busy during work time. Many worked on colors, geometric shapes, letter sounds with the sand tray and sandpaper letters, the touch tablets feeling the difference between rough and smooth, and many math exercises. 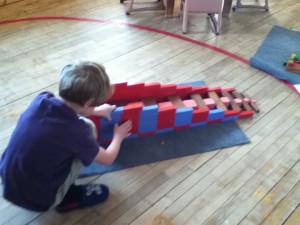 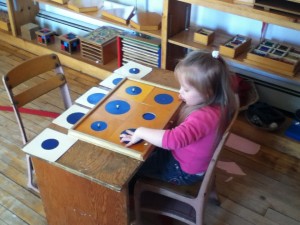 Kindergarten has been using the bead material to solve word problems. We played a game with division to introduce this. I told them I had so much money and I wanted to divide it among my friends (we did this 3 at a time). I put 6 thousand cubes, 6 hundred squares, 3 tens and 3 units of the bead material on a tray and ask them how I could divide it equally. They responded with, “Give one to each of us!” starting with the thousands cubes, then the hundreds squares, the tens and the units. When we had divided it equally on their trays, we counted it up and used the number cards to see what 6633 was divided by 3. Then we pushed it back together and added 2211 +2211+ 2211, which also gave us the opportunity to talk about multiplication. They were very excited to see they could easily solve word problems and do division using the bead material. They were so engaged we’ve been putting up a new math word problems every day.