Lots of exciting things happened at Sunnybrook this week! 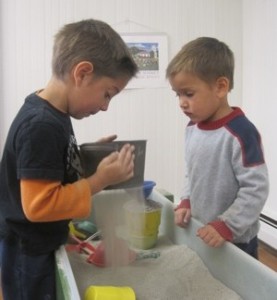 Sand in the Sensory Table 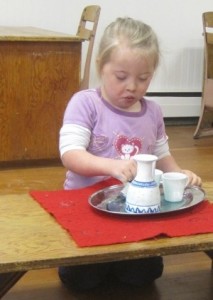 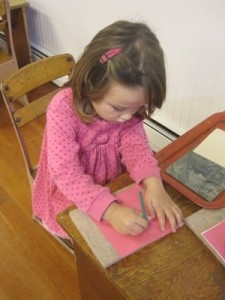 For music time on Tuesday we got to use the big drum for the first time.  Everyone was so excited to have a turn beating out a rhythm.

At the art table we decorated our talking stick, which will be held by whoever is speaking during circle time.  The talking stick will be passed around the circle and students will take turns sharing stories, making encouraging statements about our friends, and giving ideas and suggestions.  We used it for the first time while making our classroom rules. 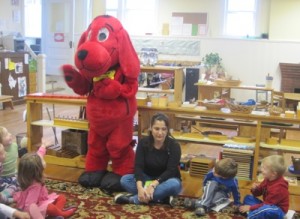 On Thursday we had a special visitor.  Clifford the Big Red Dog came with Gina from Believe in Books, and we all got a chance to hug him, shake his paw, or give him a high five.  It was very exciting!  Gina read us a book about Clifford’s birthday party, then we each chose a book to take home. 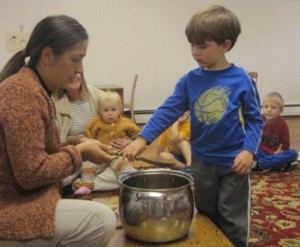 After Clifford left, it was time for our Mexican Fiesta!  Zeanny came with her hermana (sister) and madre (mother), who are visiting from Costa Rica.  We learned how to make chocolate caliente (hot chocolate) with real chocolate, cloves, cinnamon, raw sugar, and milk.  We all had a chance to see and smell the ingredients and add something to the pot.  Afterwards, we could not wait to get outside and break open the piñata!  Everyone had a chance to hit it before it cracked open and all of the treats fell out, which we enjoyed with our chocolate caliente. 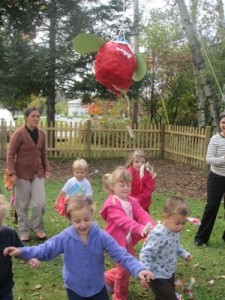 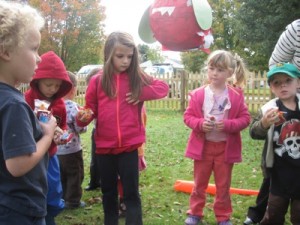 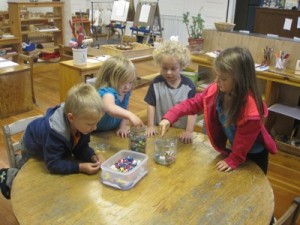 Friday students have expressed an interest in science, so we decided to have a Friday morning science club.  This week the students chose to do an experiment to see why heavy boats can float on water, but other things, like round marbles, just sink.  We made round clay balls and selected some marbles.  When we placed them on the water, they sank.  Then we took the clay and made wide curved boats out of them, which floated.  One of them even held four marbles before sinking! 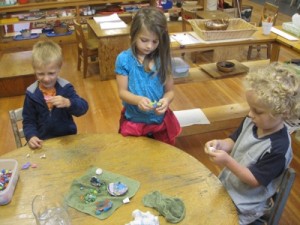 Next week we will be talking more about respect, with an emphasis on not blaming others.  We will also be learning about which continent and country we live in.  For Spanish in October we will be focusing on Guatemala.