Tuesday was an excellent work day with the Montessori materials. The children were very focused on their work.
We read “Monster Musical Chairs” by Stuart Murphy. This book was about subtraction. To reinforce the concept we played musical chairs. We also used 10 corks and each child would take one away then count how many were left. Then two would be taken away and we would count how many were left and so on until 10 were taken away from 10 to emphasize the concept of zero.

The children used chalk outside to color the tree stump and cement patio. One child blew on the chalk and made “chalk smoke” – good observation.

Brigette brought in the shell of a coconut and shared pieces of coconut with all the children for taste and texture.

On Wednesday two Sunnybrook graduates joined us for a couple of hours in the afternoon. Cloe treated the children to a story… “Musicians of the Sun”, by Gerald McDermott. 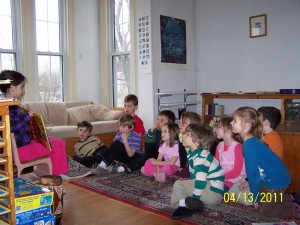 Zeanny came on Thursday and gave a great Spanish lesson. She also gave the children a Spanish book naming the animals. Thanks Zeanny.

Tammy and Brigette gave all of us a wonderful scrumptious ice cream party. Thank you both.

We all engaged in a wonderful movement song called “Rattlin Bog”. The children were so enthused about this song.

Tammy read “Molasses Flood” by Blair Lent. It is a fictitious story but really based on a molasses tank exploding in a small part of the Boston Waterfront.

Today is my last day as substitute director and I want to thank all of you – children and parents for the marvelous opportunity of working with all of you. It has been a pleasure.

Thank you Tammy and Brigette – you were both so helpful and enthusiastic.