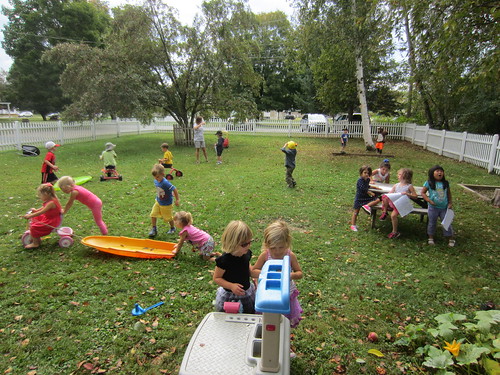 We had a fantastic first week at Sunnybrook!  The new students were warmly welcomed by the returning students.  They quickly and easily integrated into the structure and routine of the environment, becoming comfortable with the daily routine, use of the materials, and the overall atmosphere of the school.  It was enjoyable seeing old friends reunite, and new friendships being formed. 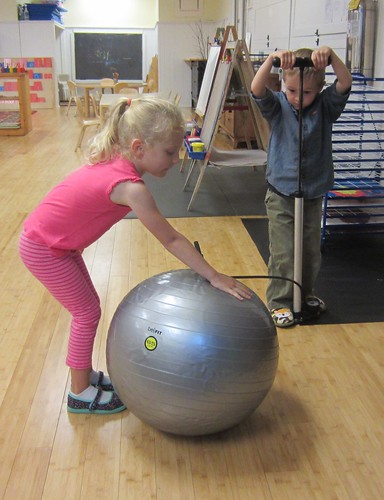 The toasty summer weather motivated lots of running and exploring on the playground.  All of the toys that were neglected during the summer months were put to good use, and new skills acquired were proudly displayed.  We were excited to be gifted a large exercise ball, which the children had a great deal of fun inflating, then pushing, rolling, pounding, and kicking all around the yard. 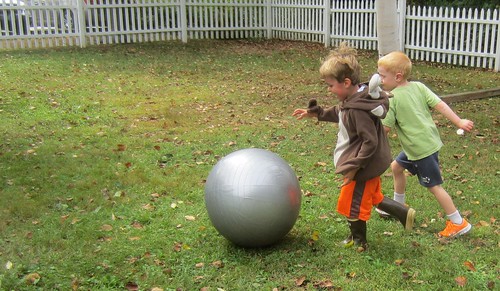 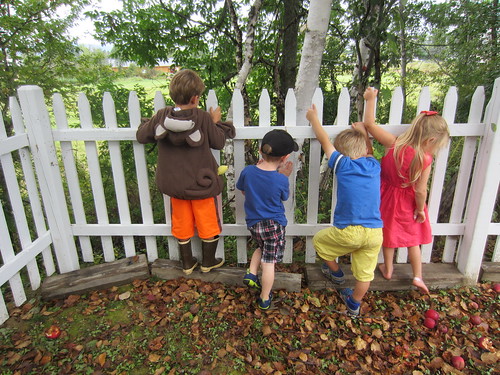 The newly implemented Morning Meetings have been a great start to our days.  They have helped to set the tone for the day, introduce new activities, and pull us together as a cohesive Sunnybrook group.  We have been singing lots of name songs and introducing some basic classroom expectations.  We have also begun to learn some sign language, starting with the letters of the alphabet.  Thank you to everyone for making this possible. 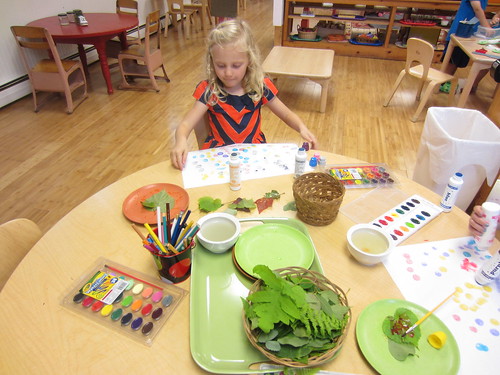 At the art table the children had supplies available to do some watercolor leaf printing, and to use some donated dot marker paints, which were very popular!  The easels were also very busy all week, with lots of new paintings completed.  The color mixing resulted in some beautiful colors. 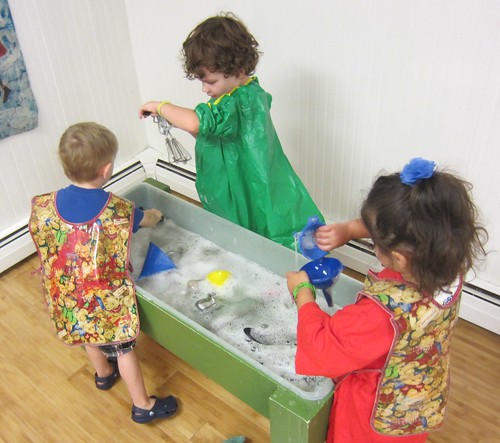 In the sensory table the children decided that they wanted water, so we filled it up with water, soap suds, and some fun tools.  They did well staying dry and keeping it off the floor with all of the pouring, scooping, stirring, and mixing they did! 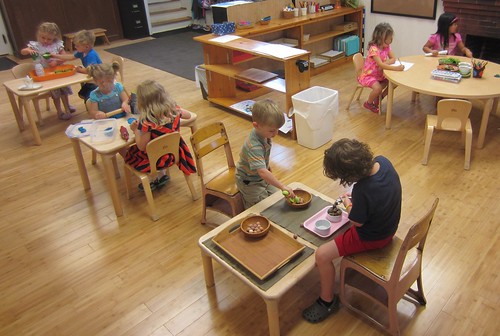 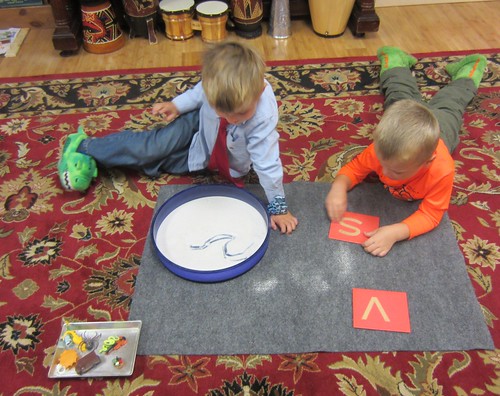 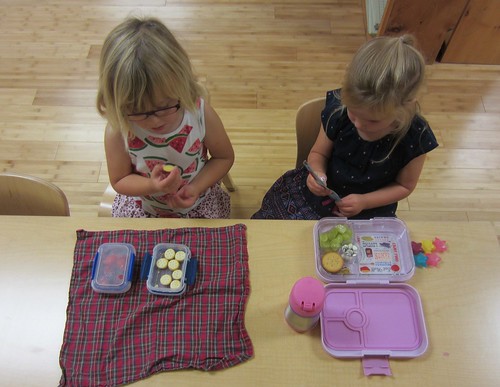 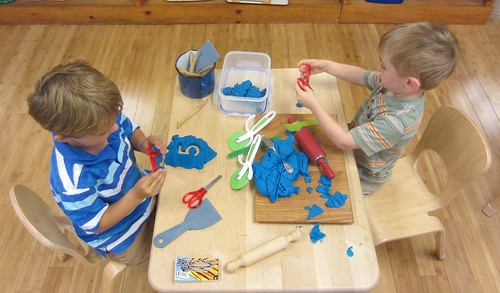 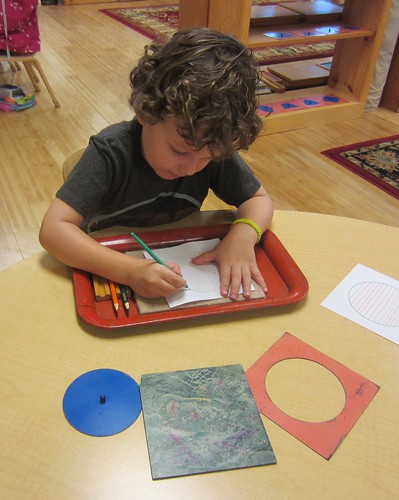 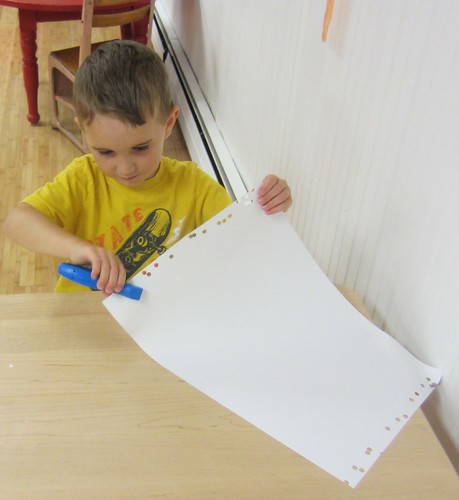 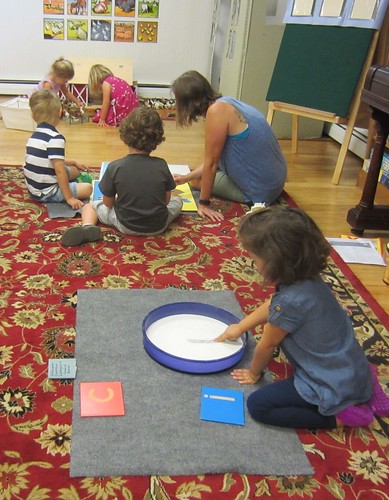 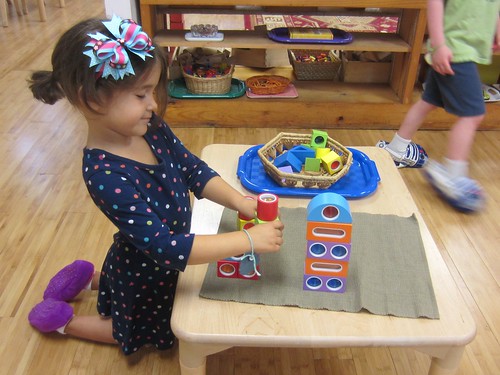 During circle times we learned some songs that helped us get to know each other and we read a few stories, including We Are All Alike, We Are All Different and This Little Chick.  On Thursday we pulled out the parachute and played some games, lifting and lowering it, shaking it, and grabbing animals from underneath and running back to our spots. 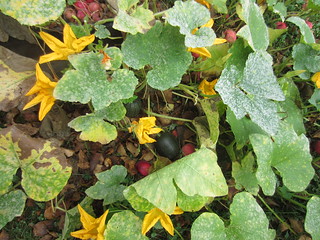 We also noticed this week that some pumpkins are starting to grow in our pumpkin patch that we planted last spring. They are still small and green, but we are excited to watch them grow and change color.

Friday students were introduced to Science Fridays when we read What is a Scientist?  We learned that scientists observe, ask questions, test, and document.  We then read the story Seven Blind Mice by Ed Young, which demonstrated how important it is to use all of the information we can to understand something.  During recess we practiced observing and comparing by collecting apples, seeing how they were alike and different, and noticing what they look like.  Some had bruises, some had black spots, some were cut, some were mushy, others were hard, and some had been chewed up by an animal, which we knew was a chipmunk, as we had observed it earlier in the week.  We even opened up the apples and counted seeds to see if they all had the same amount.  Throughout the year we will hone our senses and our scientific skills of questioning, testing, and documenting.