Reptiles were loose in the classroom, as we continued to study about that group with dry, scaly, waterproof skin, who lie in the sun to get warm.  We were particularly focused on turtles and snakes this week.  We got to study the carapace (top shell) and plastron (bottom shell) of a red eared slider turtle, and the carapace of a large snapping turtle up close.  We found that the carapace and plastron of a turtle are actually quite light, not heavy as one might think.  We also closely examined a snake skin, taking note of the scoots on the belly that help the snake move, and the skin that covers the eyes, as snakes do not have eyelids to blink, rather skin that covers the whole thing.

In the afternoons the kindergarten students began making reptile posters, drawing pictures of their chosen reptiles, listening to books about reptiles, and recording some of the most interesting facts.  They were having such a good time that the younger students decided to join them, and everyone had fun making posters.

During Monday art the children made their own stamps to make prints with.  They cut out pieces of foam that were sticky on the back, stuck them to a wooden block, and printed with them to create works of art.  They were very excited to take them home to share. 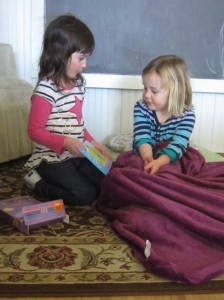 a story before nap 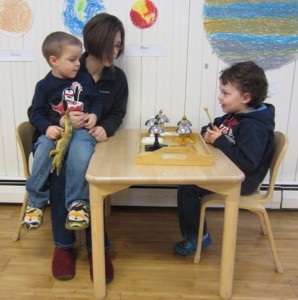 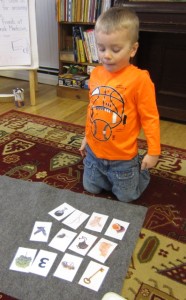 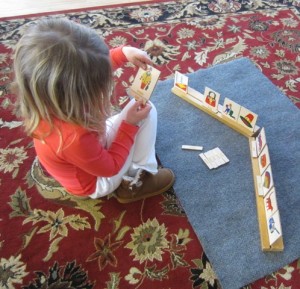 Thursday was the very much anticipated Valentine’s Day party!  The children helped arrange the tables in a row and  hang the Valentine mail pockets.  Then each child worked with a teacher or older student to deliver their Valentine cards to the correct pockets.  It was so exciting to peek in and see all of the wonderful cards and candy waiting for us!   While waiting for turns to deliver their valentine’s some students decorated giant hearts, and others played games or read stories.  After all of the cards were delivered, we sang some Valentine songs, read The Valentine Bears, then enjoyed all of the yummy fruit, yogurt, dip, popcorn, muffins, cookies, and chocolate that was sent in for the party.  Thank you so much to everyone who sent in a treat – it was very much enjoyed! 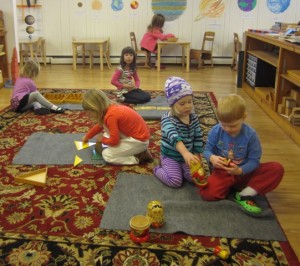 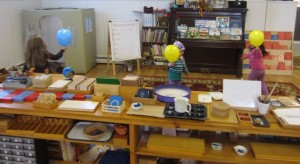 Friday students continued to learn about the planets during science.  They painted the terrestrial planets that they made last week out of clay; Mercury, Venus, Earth, and Mars, while we read about the four gas giants; Jupiter, Saturn, Uranus, and Neptune.  When they were done painting, they each picked a balloon to represent one of the gas giants, then had fun orbiting the sun.  Because the gas giants are further away, they had to orbit all the way around the classroom around the sun in a counterclockwise direction, while spinning.  Wow, it is tricky being a planet! 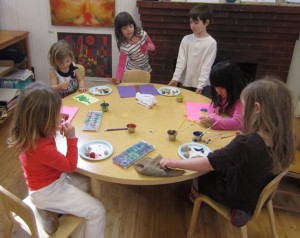