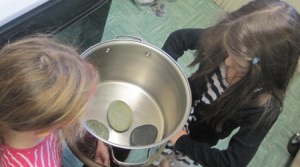 There was a lot of excitement this week about Stone Soup and the Thanksgiving break.

On Tuesday the students took turns cutting up vegetables for our soup.  We had lots of carrots and onions, a delicata squash, some potatoes, celery, and kale.  We re-read Some Friends to Feed and enjoyed singing the song at the end.  We talked about the vegetables that we cut up, and discussed how they would get soft when they were cooked.  We wondered what would happen to our stones.  Would they get soft too, or would they stay hard?  Everyone made a prediction about what they thought would happen to the stones when they were cooked. 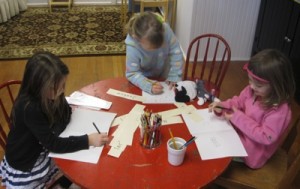 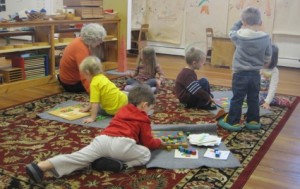 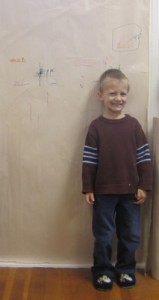 How Tall Are You?

We set out some tape measures, and the children spent some time measuring the classroom and the playground and writing down their measurements.  Some students decided to measure themselves, so we hung a piece of paper on the wall and anyone who wished to stood against the wall and wrote their name above the mark at the top of their head.  They were able to clearly see who was taller or shorter than whom. 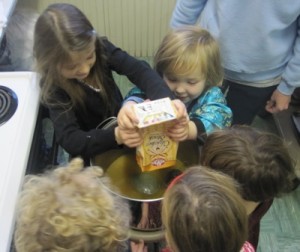 On Wednesday, the early morning students helped to get the stone soup cooking so it would be ready to eat.  They added the stones (thoroughly pre-boiled and washed), broth, water, spices, and ingredients, then stirred them up and placed the pot on the stove to cook.

Some students helped to prepare for our stone soup meal by cutting up cheese. 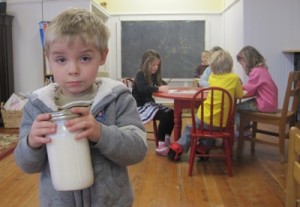 We poured some cream into a mason jar, and everyone took turns shaking it throughout the morning, wondering and guessing what would happen to it.  After a while, we started to notice it thickening, and eventually it became butter! 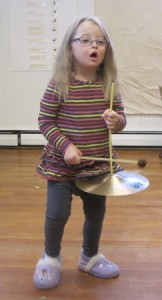 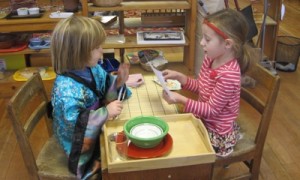 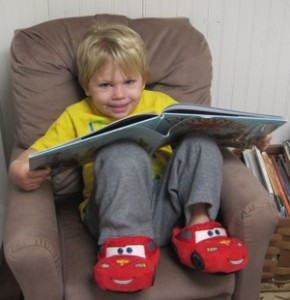 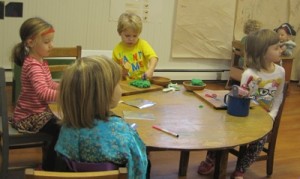 Working at the Art Table 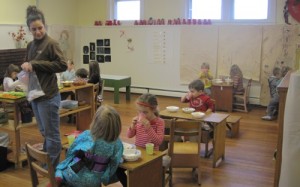 After several hours of cooking, the stone soup was finally ready!  While the younger students listened to a last version of the Stone Soup story, the kindergarten students helped set out the crackers, butter, grapes, cheese, and extra carrots and celery for snacking.  Many students tried the soup and their home-made butter.  They also examined one of the stones and concluded that it stayed hard and did not get soft like the vegetables did.   It was a great time!  Thank you to everyone who shared food items for our soup and snacks.

Next week we will begin to focus on preparations for our Winter Celebration on the 14th.  We will be visiting the Post Office on Wednesday, November 28th at 9:30 to find out what happens behind the scenes.

We wish you all a Happy Thanksgiving break!