The children have been very busy with their work! Some new activities out on the shelves this week:

Snowball Counters, which is a seasonal variation on our Numbers and Counters. To do this work the children put the mittens (which all have a numeral printed on them) on the mat in the correct order from 1-10. They then place the snowballs (cotton balls) under the corresponding mitten. For example the mitten with the “1” would have one snowball placed under it. The control of error is that there are 55 snowballs and if the child ends up with some left over or they do not have enough, then they know to go back and re-check their work. 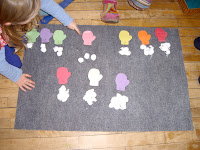 Other seasonal variations on favorite activities include our winter lacing cards: 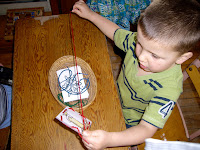 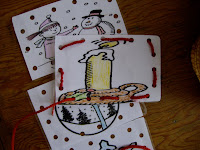 and our holiday tree at the cutting station. This has been a group effort over the last couple weeks with most everyone contributing to the decorating. This started as a basic, pencil outline of a tree and the children were provided with construction paper, scissors and glue and made a festive creation! 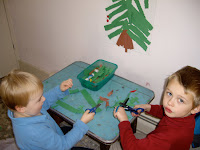 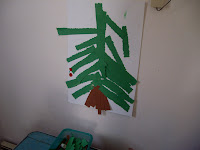 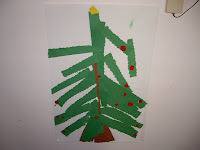 There has been a lot of interest in our math material lately. The Bank Game with the Golden Beads and the Golden Bead addition has been popular among our older students. For those who are not familiar (or need a refresher!) the Golden Beads are a great tool to introduce the children to the decimal system and understand unit quantities of ten, hundreds and thousands. A single bead equals one unit, ten beads strung on a wire indicates ten, one hundred is indicated by 10 bars side by side (which makes a square) and one thousand is ten one hundreds stacked on top of one another to make a cube. In our bank game the children go back and forth to the “bank” to exchange their quantities. For example if a child counts that they have 10 units, they may go to the bank to exchange them for 1 ten. If they count that they have 10 hundreds they may go to the bank to exchange them for a thousands cube. The Golden Beads and the small and large number cards allow the children to perform simple addition with really BIG numbers. 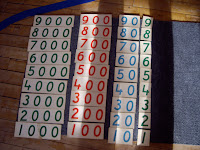 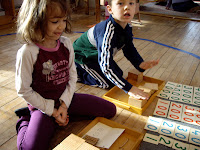 During group time we’ve been talking and reading about different animals and which class they belong in. On Tuesday we made booklets about the life cycle of a frog and discussed that it belonged to the amphibian class and on Thursday we brainstormed a list of animals that are considered mammals. We hope to do more with animal classes after break as there seems to be a lot of interest in the subject.

We’ve been busy practicing for our Winter Celebration event! It will be held on Thursday, December 17th at 4pm at the Lancaster Congregational Church. The children are very excited to share the songs they have been working on.

And a few more happenings in the classroom:
(Yes, I went a little picture crazy this week) 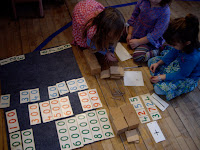 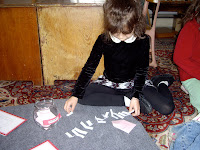 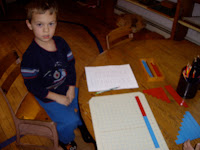 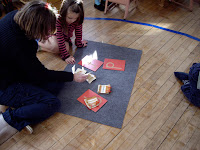 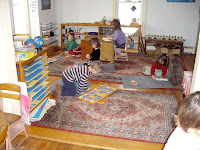